When most people think of a wine area in Italy, Tuscany comes to mind but few people realize that each Italian region has a special quality wine to offer. The first DOCG denomination in Italy has been given to wine from Lazio.

In all, therefore, in Lazio, there are 3 DOCGs and 26 DOCs (in addition to 6 IGTs). The agri-food production includes 11 PDOs and 8 PGIs.

When most people think of a wine area in Italy, Tuscany comes to mind but few people realize that each Italian region has a special quality wine to offer. The first DOCG denomination in Italy has been given to wine from Lazio.

In all, therefore, in Lazio, there are 3 DOCGs and 26 DOCs (in addition to 6 IGTs). The agri-food production includes 11 PDOs and 8 PGIs.

The wine area of Lazio - Italy

Lazio is the Italian region whose provincial capital is the well-known Rome appreciated and admired by tourists from all over the world mostly for its history. 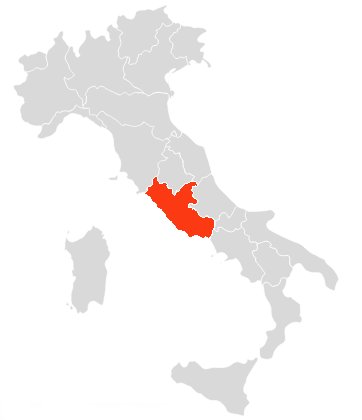 Of the wine area in Italy, Lazio covers almost 28,000 hectares which gives rise to over 2 million hectoliters of wine. It is  50% hilly and the remainder is divided halfway between lowland and mountainous areas.

The vineyards are located 70% in the hills and 30% in flat areas. Thanks to the presence of volcanoes, lakes, hilly areas and reclaimed plains, Lazio has a mixed territory that gives rise to different types of wine made by exploiting in particular the potential of native vines.

The most important native black grape variety is undoubtedly the Cesanese which is the basis of excellent wines. Other black grape varieties grown in Lazio are: Montepulciano, Ciliegiolo, Merlot and Cabernet Sauvignon.

For the white wines instead Malvasia, Trebbiano and Grechetto are used, the latter grown mainly on the border with Umbria. 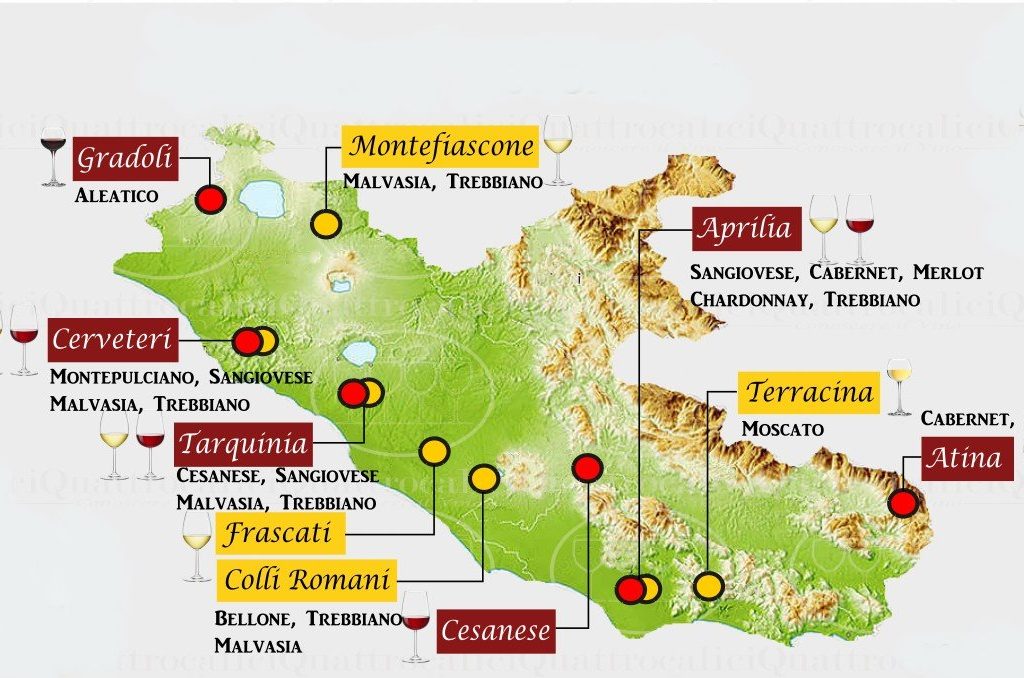 The most important wine area of Lazio is: the Castelli Romani, south-east of Rome.

The Castelli Romani are dotted with medieval villages, villas, vineyards, woods and is by chance the area where we decided to move from Rome over 20 years ago and settle Olive Tree Hill.  Here white berried grapes such as Malvasia del Lazio and Trebbiano yellow predominate and then Bellone and other local varieties. Among the black berried ones Cesanese, Sangiovese and Montepulciano, but also Merlot, Ciliegiolo and Bombino Nero.

in the area the DOC denomination is assigned to the wines of Zagarolo, Frascati, Colonna, Montecompatri and Cori.

Towards the south, between Rome and Frosinone, in the territories of Ciociaria, Cesanese reigns, a native black grape variety that gives rise to high quality red wines often associated with Barbera, Montepulciano and Sangiovese vines.

To the east, in the province of Latina, red wines prevail. The Aprilia DOC and Circeo DOC stand out,

In the province of Viterbo, on the volcanic soils around Lake Bolsena, mainly white grapes are grown such as Trebbiano Toscano and Trebbiano Giallo, as well as Malvasia puntinata del Lazio. The most famous local wine is the East! East!! East!!!; among the red wines the Aleatico di Gradoli DOC. The other two denominations of the area are Tarquinia DOC and Cerveteri DOC (in the province of Rome).

The vineyards of the province of Rieti are located on the foothills of the Apennines. The Colli della Sabina DOC is shared with the province of Rome, and includes almost the entire right bank of the Tiber.

Perfect for an aperitif with friends, Lazio wine match perfectly with the classic first courses of the Roman cuisine (aka Lazio cuisine) such as carbonara, cacio e pepe, gricia, etc.

In addition, the white wines of Lazio go perfectly with white meats, fish, vegetables and dairy products such as mozzarella and burrata.

For tastier and tastier dishes such as a pasta amatriciana, or a meat-based main courses of Roman cuisine e Lazio cuisine such as tripe, ossobuco, pancetta and peas. At the table, the Cesanese adds to the dish that pinch of spiciness and at the same time sweetness that manages to make the dish even tastier.

Cesanese is an intense and pleasant wine, important but versatile, suitable for a party evening with friends but also for that simpler everyday cuisine, to be enjoyed with the family.

The story tells of a German bishop who had to point out to Emperor Henry V of Germany, on a visit to the pope, the places to stop around the capital and find good wine.

The bishop’s servant, who arrived in Montefiascone and tasted the local wine, was so enthusiastic that he wrote next to the door of a local Hostaria: “Est! Est !! Est !!!”. The bishop, having arrived in the village, shared the judgment of his cupbearer and extended his stay in Montefiascone for three days.